Home » How To Help Kids Make Healthier Choices » Organic vs. Conventional, Is There Really a Difference?

Organic vs. Conventional, Is There Really a Difference?

There has been much debate over whether or not buying organic foods rather than conventional foods justifies the more expensive prices charged at major supermarkets.  This article looks at some of the major studies done comparing organic vs. conventional foods based on nutritional values, pesticide and other harmful substance levels and environmental aspects.

The popularity of organic foods has grown drastically in the U.S. with sales passing $13.8 billion since 2005 (Organic Trade Assn. 2006).  This article is based on studies which clearly display differences with respect to nutritional value and food safety issues.

Organic farming promotes environmental-friendly practices (farming practices that are better for our planet).  The USDA has specific regulations before a food can be labeled organic.  Organic foods must be grown without:

It takes many years to convert a field from conventional farming to organic farming.  This is because the farmland can not have any of the prohibited substances used on it for 3 years before the harvest of an organic crop.

Plants are not the only products that have regulations.  If a farmer wants to have the food products from animals labeled organic, the animals must meet specific regulations.

Organic vs Conventional: Let's look at the facts 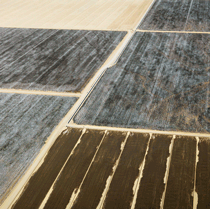 These reports provide strong evidence that pesticide residues are much more likely to be detected in conventional foods than in organic foods (Pussemier and others (2006).

Many consumers buy organic foods because they think it has more nutrition. Recently, researchers have conducted several controlled studies to compare organic and conventional foods with respect to nutritional content.  Some studies have concluded that organic production methods lead to increases in nutrients, such as antioxidants, which are considered to have human health benefits.  However, other studies did not demonstrate differences in nutrients between organic and conventional production methods.  Although, organic foods may or may not have the same amount of vitamins and minerals, having no pesticides is definitely healthier.

The use of animal manure as fertilizer presents possible health risks if the manure has not been properly composted: they can contaminate crops. While both conventional and organic farming often use animal manure for fertilization, manure use is more common in organic production since organic producers cannot use synthetic fertilizers. It is worth noting  that organic standards require that animal manure is composted according to specific procedures or applied more than 90 days before harvest; conventional food production does not have such requirements.

Organic Produce: To buy or Not to Buy

In conclusion, these studies demonstrate that tradeoffs exist between organic and conventional food production.

Like anything in life, there are tradeoffs. There are benefits and possible negative aspects. If the good outweigh the bad, as most of the newer studies are showing for organic food, this may explain the popular trend towards the purchasing of organic foods rather than conventional foods.

See All Our Nutrition Articles